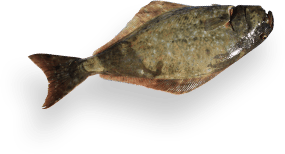 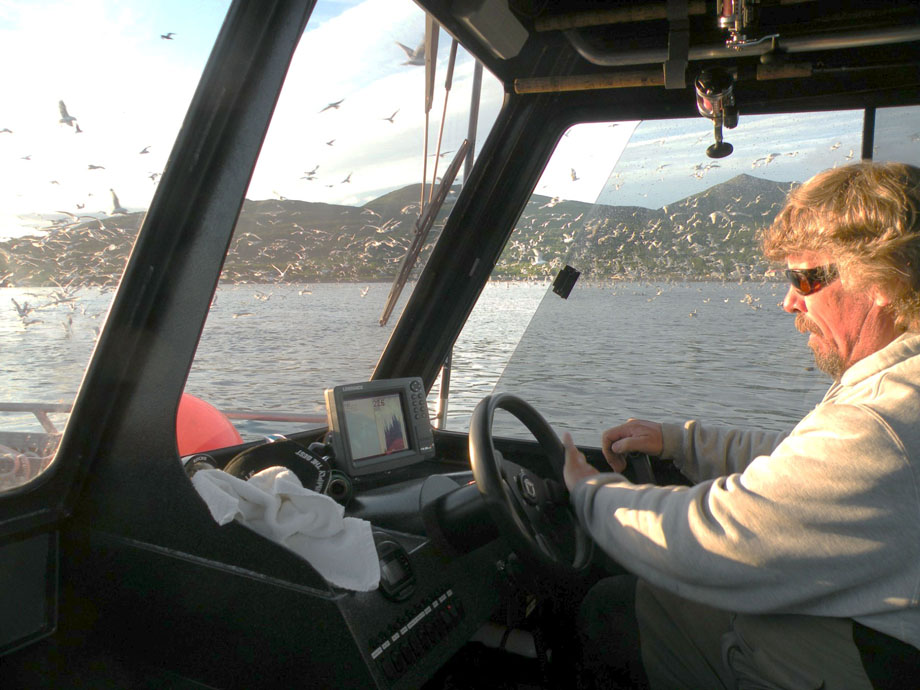 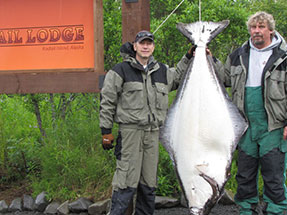 Foxtail Lodge offers truly fantastic Kodiak Island halibut fishing! One of the great things about halibut fishing out of Larsen Bay is the short distance that you have to travel to the fishing grounds! Here you will appreciate being located close to the where the fishing is happening! You're not going to spend hours running long distances to get to the fishing grounds, or sitting around waiting to fish during a short slack tide window of opportunity, like you do in other areas of Alaska.

Even though we are fishing in saltwater we don't have the big ocean swells to deal with and the true bonus is that there are never any crowded halibut fishing areas! 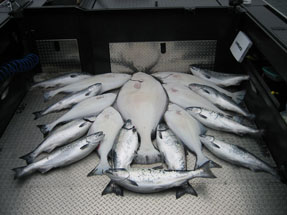 The Larsen Bay area has some of Alaska's best halibut fishing with all sizes available in shallow (30' to 140') waters with very light currents. We try to minimize the time that we spend in the deep water. Sometimes we fish up to 300 feet but still utilize light weight (24oz) No battling heavy currents with pounds of weight to get to the bottom! Here the halibut are so plentiful that we often get them while trolling in 30 feet of water for kings and silvers using light tackle!

Halibut are available all year, although the best fishing is from May to the end of September. The Alaska Fish & Wildlife have determined that the waters off Kodiak Island to be the best in all of Alaska for producing big numbers of both large and small halibut. Not all halibut are “barn door” size, and according to the Alaska Dept. of Game and Fish the average halibut caught by anglers is 15-20 lbs.

The limit for Halibut in the Larsen Bay area is two a day! State law requires that each person hook their own two fish. You may catch and release halibut until you get the two you decide to keep. One halibut can be any size and the other must be 28" in length or less.

The new regulations in our area for the annual limit on a paid charter trip is four halibut per year per angler. We feel these regulations for Kodiak are better than some of the other areas of Alaska. For example: the current regulations for South East Alaska are you can only retain one halibut a day but it has to be 38" or less or 80' or over with no annual limit. 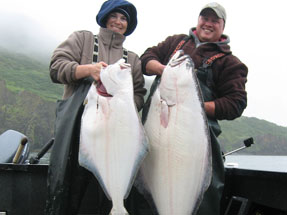 There are no rules about releasing giant halibut. You can keep as big of a fish as you can catch, our goal is to retain halibut in the 40 to 50 lb range as the smaller fish are better eating and the large fish are females and are the brood stock for future fishing seasons. For this reason we like to release the giant fish. Again there are no lodge or boat rules, it is totally up to you as we frequently catch halibut over 100 lbs.

Halibut dress out at 35 to 40%, so a 30 pound fish is going to be yield about 12 to 14 pounds of boneless fillets, which is allot of fish! This can add up quickly, so it is important to keep in mind how much fish you actually want to keep. Once a fish is brought into the boat, it goes onto your limit. All fish brought aboard are killed and bled immediately, ensuring the fillets are the best possible quality. This is as fresh as it gets, and I’m sure that when you sit down to eat some, you will agree that it does not get any better! 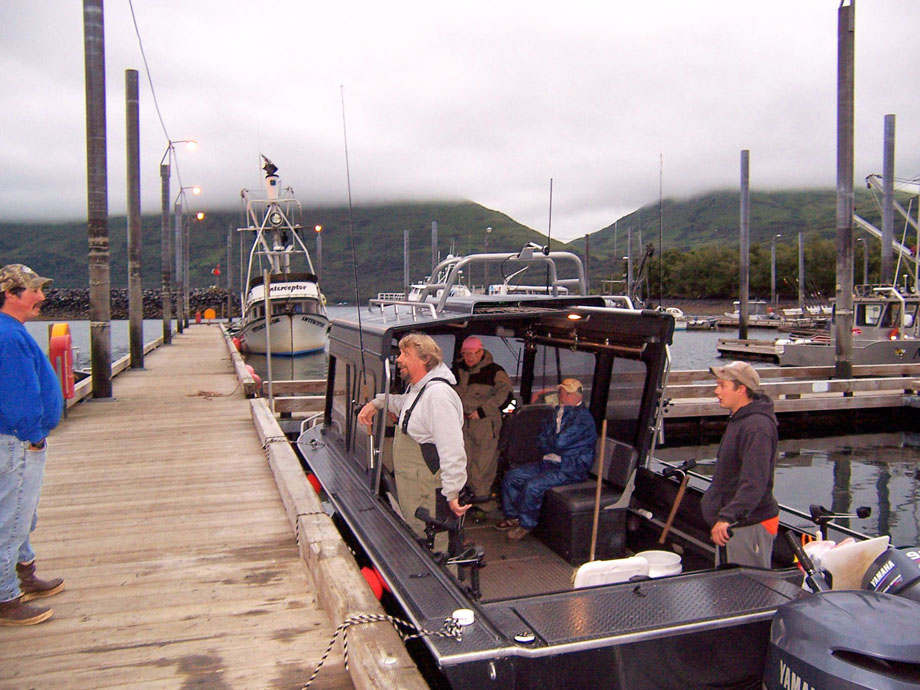 The Larsen Bay area has all five species of salmon! The three that are considered to be the most prized catch are the Chinook, Coho and Sockeye, which are commonly referred to in Alaska as King, Silver and Red salmon. Many days we will fish all day and never see more than one or two boats! All of the fishing provided by Foxtail Lodge is saltwater fishing, this allows us to offer a variety of fish from salmon to halibut and bottom fish.

All of our King Salmon and Coho Salmon are chrome bright, “WILD” fish, in the prime of their life! These will be the best salmon you will ever eat! The highly prized White King Salmon are also common in and around Larsen Bay! 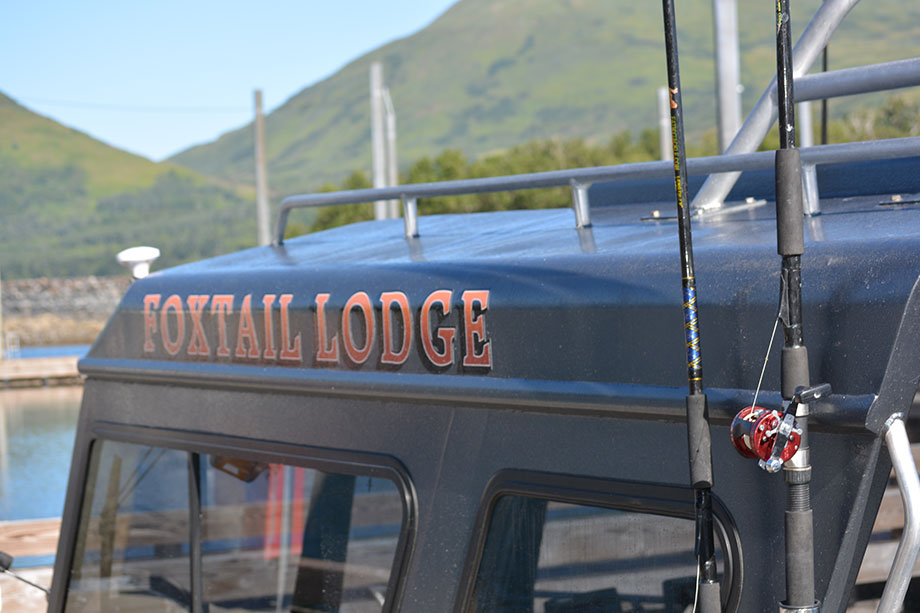 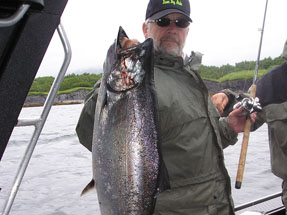 On Kodiak Island King Salmon are available and open to fishing for the entire year, with the best fishing occurring from May through September. The number of kings caught in May and June are greater than in July and August, these are the five year old fish and they can be huge! Often weighing more than 50 lbs! When the king season peaks in July and August, the three and four year old fish are more abundant and their size typically runs from 15 to 30 pounds.

The saltwater limit for King Salmon is 2 fish per person per day. 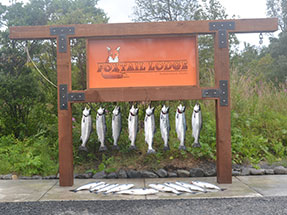 The third week of July is when we are hooking into the first acrobatic Silver salmon of the season! These fish are aggressive biters, feeding heavily during this time, and growing a pound a week during their final summer in the salt water. These Silvers explode through the surface, tail walk across the water, make long hard runs, and then come straight back at you! All of a sudden you hear the clicker on the reel next to you and all the rods on the boat are bent with fish taking out line in every direction! As you look down in the water you see salmon chasing the salmon that are hooked, biting at the weights, swivels and any thing that looks like it can be eaten! Bent rods, burning arms, line screaming off of reels and fish jumping, this is what salmon fishing is meant to be!

By August these fish are here in droves, as thousands of coho move into the Larsen Bay area. With the return of these Silvers to spawn in the local tributaries, August is when our most productive fishing begins. We catch large numbers of these fish and target them in the ocean by trolling various baits or mooching with jigs and cut herring.

In addition to catching silvers in the ocean in July and August we catch many saltwater kings feeding with the silvers.

The first coho fish of the season usually run 10 to 12 lbs, by the end of July we're catching fish in the 12 to16 pound range which accompany our catch of king salmon during this time.

By the first of August 12 to 14 lb fish are common with an occasional fish pushing the 20 pound mark! The end of August and first part of September 15 to 18 pounds is the average size with some fish coming in well over 20 pounds!

The State of Alaska sport fishing record for a silver salmon is 26 pounds. Records are here to be broken.

The salt water limit for Coho Salmon is 5 fish per day. 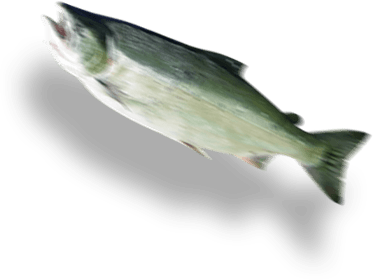 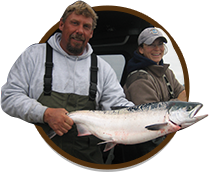 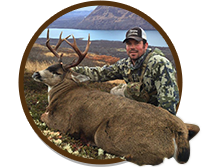 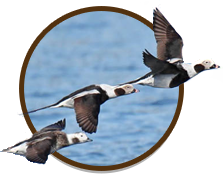 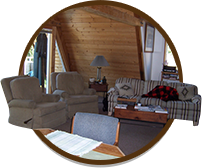 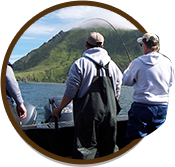